You are here: Home / Origins Of The Hebrew Bible / THREE: HEBREW BIBLE: The Patriarchs, Moses, the Exodus and the Conquest of Canaan

The Patriarchs, Moses, the Exodus and the Conquest of Canaan [1]* 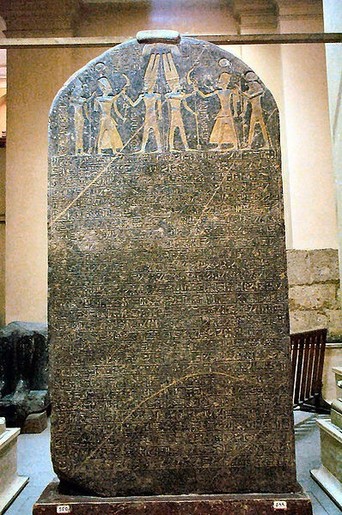 Merneptah Stele known as the Israel stela (JE 31408) from the Egyptian Museum in Cairo.

If one approaches the Bible as a historical source, the further back in time you go, the less reliable it tends to become.  The recording and retelling of many events, such as the stories about the patriarchs, the flood, the Exodus and the invasion of Canaan, lie far away chronologically from the time of their reported occurrence and consequently this raises considerable doubt about their reliability and authenticity.  None of the source documents of the Pentateuch are written from primary sources or within a millennium of the events they purport to describe[1].  So how could an oral tradition have preserved details which may be considered correct and reliable across such a gap?[2]

By way of example, in the midst of reciting Esau’s genealogy, Genesis 36:31 suddenly contains a reference to kings reigning over Israel, when kings did not rule over Israel until ca 1025 BCE and thereafter[3].  On events such as these, the reliability of the biblical account is at best debatable and its scope narrow, and at worst plainly wrong.

Before the reconstruction of the First Temple built by King Solomon, few of the events recorded in the Hebrew Bible can be taken at face value, and even that event is debatable[4].  Scholars and historians erudite in this field generally view the stories of the patriarchal period with the central figures of Abraham, Isaac and Jacob at their kernel as little more than pious fictions, more likely than not being derived from ancient folk memories and legends.

Take the following verses from Deuteronomy Chapter 26[5], which have been embellished to provide some form of historical justification for the seizure of the land by the new settlers after the exile.  Note especially in the present context, verse 5 and 9:

According to the Bible, this wandering Aramean reputedly went firstly north and then wandered until he located the Promised Land, but the patriarchal period is essentially non-existent as a historic event, and it is impossible to find any trace of Abraham in Ur, his supposed region of genesis in Mesopotamia, where people worshipped pagan deities such as the moon.

The tale of Abraham is replete with many anachronisms in the Biblical account, indicating a much later period of composition.  In the first place, the Philistines did not establish their settlements along the coastal plain of Canaan until sometime after 1100 BCE, and secondly, camels, mentioned in the patriarchal texts as beasts of burden, were not domesticated earlier than the late 2nd century and not widely used in that capacity in the ancient Near East until well after 1000 BCE[6].  In other words, Abraham and his descendants, Isaac and Jacob, are not historical figures.  To put it even more bluntly, they never existed.  The true significance of these stories is that they served a political purpose – the staking of a claim to the land as one promised by God.

There is also no evidence of any kind to substantiate the biblical narratives about Moses, the Exodus from Egypt and the Israelite conquest of the land of Canaan.  References to the Land of Goshen (the place in the eastern delta supposedly given to the Hebrews by Joseph’s Pharaoh[7], and the land from which they later left Egypt at the time of the Exodus) do not occur in Egyptian texts until after Israel was firmly settled in Palestine.  There is also no archaeological evidence about the Israelites ever being in Egypt, neither in monumental inscriptions on the walls of temples, nor in tombs, nor in papyri[8], and no evidence outside the Biblical text for Moses, whom it is suggested in some quarters, may have been a folk memory of the Hyksos – the Western Semitic Pharaohs who at one time ruled Egypt up to the Sinai from c 1800 BCE until they were expelled c 1560 BCE.

Since the last decade of the 20th Century, new archaeological evidence has left most mainstream archaeologists doubting the historical truth of any kind of mass Exodus of the Israelites from Egypt and large scale wanderings of people in the wilderness of Sinai, estimated on the biblical account at being at least in the several hundreds of thousands over a lengthy period of years[9].  Yet, in other areas all over the world, modern archaeological techniques have proved capable of detecting even the smallest remains of hunter-gatherers and pastoral nomads, but not in this instance.  For example, archaeologists have discovered a letter dated to 13th century BCE from an Egyptian border guard who reported the escape of two slaves from the city of Rameses into the desert. So, even a relatively small group of escaped slaves would not have escaped detection by the Egyptians [10].

The supposed route of the Exodus is not a topographical match for the 15th -13th century BCE, the broad period when it is supposed to have occurred, but is more of a match with the 7th century.  And even though the Pentateuch describes wanderings in the desert, 38 out of the 40 years were supposedly spent in one location: Kadesh-Barnea[11] The location of Kadesh-Barnea has been safely identified, yet nothing corroborative of an Exodus story has been revealed.

In fact, despite many expeditions and digs over the entire Sinai Peninsula, not a single evidence of occupation earlier than the tenth century BCE, 300 years after the supposed Exodus, has surfaced.  Ezion-Geber, where the ancient Israelites supposedly encamped[12], is another site that has been identified by archaeologists. Yet here too, no artifacts dating to the time of the Exodus can be found, and despite numerous digs on Mount Sinai on the southern tip of Sinai Peninsula, no evidence has been found of any ancient Israelite presence there.

One thing archaeology has managed to establish is that from the 15th to the 11th BCE Canaan was a province of Egypt, and under Egyptian control throughout this period, so the Israelites could not have escaped from the Egyptian yolk by traveling there[13].   And if the Exodus goes by the wayside, so also do the miracles that attend it, such as the parting of the Red Sea, the manna from heaven and the supply of water from the Rock in Horeb[14]!

The Bible says that the Israelites originally came from Mesopotamia via Abraham, and then, following slavery in Egypt, via Moses and Joshua to Canaan which they subdued by conquest. However, the hard evidence is to the effect that the Israelites actually emerged from a group of tribes already living in central Palestine. Israel’s emergence from Canaan and its origins there are substantiated by an inscription on the Merneptah Stele[15], also known as the Israel Stele or Victory Stele of Merneptah, an inscription by the Ancient Egyptian king Merneptah, who reigned from 1213 to 1203 BC.

This stone was originally discovered by Flinders Petrie in 1896 at Thebes, and is now housed in the Egyptian Museum in Cairo.  The text is largely an account of Merneptah’s victory over the Libyans and their allies, but the last few lines deal with a separate campaign in Canaan, then part of Egypt’s imperial possessions, and include the first probable instance of the name “Israel” in the historical (or more accurately, archaeological) record.  This is the only such reference before the mid-9th century BCE. Instead the scholarly consensus is that a disparate group of tribes was then already inhabiting the lower regions between the Canaanite Hill states and in the hill-country of Ephraim, having taken up residence there at some ill defined point in time beforehand.

The relevant portion of the inscription reads:
1.    The princes are prostrate, saying, “Peace!”
2.    Not one is raising his head among the Nine Bows.
3.    Now that Tehenu (Libya) has come to ruin,
Hatti is pacified;
The Canaan has been plundered into every sort of woe:
Ashkalon has been overcome;
Gezer has been captured;
Yano’am is made non-existent.
4.    Israel is laid waste and his seed is not;
5.    Hurru is become a widow because of Egypt.

The conquest of Canaan under Joshua has been discredited by modern archaeological research and scholarship.  Most of the towns said to have been destroyed by Joshua’s army were uninhabited at the time.  In the case of Jericho, there was no trace of a settlement of any kind in the thirteenth century BCE, and the earlier Late Bronze settlement there dating to the fourteenth century was small and poor, almost insignificant and unfortified.  There were no walls and no sign of any destruction.  Thus the famous scene of the Israelite forces marching around the walled town with the Ark of the Covenant, causing Jericho’s mighty walls to collapse by the blowing of their war trumpets was, to put it simply, “a romantic mirage”[16].

Earlier generations of architects had concluded that the evidence of the destruction of a number of cities in the Biblical narrative – Hazor, Aphek, Lachish and Megiddo – was the result of the Israelite invasion, but the evidence is that these destructions took place over a span or more than a century.   The possible causes include invasion, social breakdown and civil strife.  No single military force did it, and certainly not in one military campaign[17].  The book of Joshua tells a powerful tale of conquest, and indeed genocide, supported by a god who showed no respect for most of the Holy Land’s existing inhabitants[18].  It has lost no power even now, but it is not history and never was”[19].

In summary therefore, the true significance of the Moses and Joshua traditions is that they retrospectively reflected the experience of the exiles returning from Babylon[20], and the significance of the Abrahamic legend lies in the fact that it provided support for the origins of an Israelite tribal confederacy.  Abraham is reputed to have come from the north: from the land of Babylon and the River Euphrates, and Moses from the south: from Egypt and the Nile[21].  But they also had another significance, because these separate legendary strands were interwoven and interpreted politically to justify the claim to a promised land: one stemming from the north and laying the basis for a claim to the land arising from the Lord’s covenant with Abraham[22], and the other from the south stemming from Moses whose receipt of the law from Yahweh on Mt Sinai also lent support to the idea of a divine covenant[23].  These claims were in turn consummated by the legend of Joshua endorsing a claim to the land by conquest.