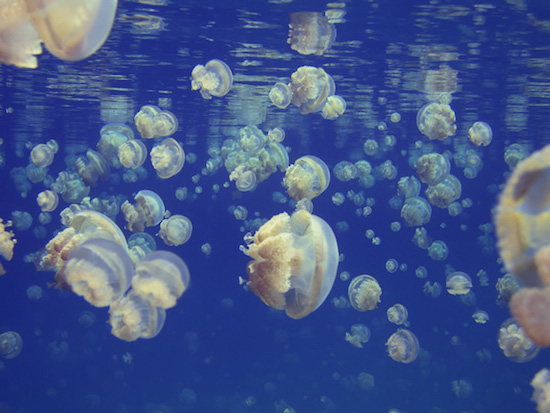 Jellyfish Lake in Palau, Micronesia © Michele Westmorland/CORBIS
By John F. Haught
Nothing in contemporary science has proved more challenging to religious believers than evolutionary biology. Disputes about the religious and theological implications of Darwin’s ideas have been going on now for more than a century and a half, and they are as heated today as ever.

Why has Darwin’s science been such a religiously troubling idea? In those parts of the world influenced by the Bible and the Qur’an, we may point to at least five reasons: (1) Darwinian biology tells a whole new story of creation, one that cannot be literally reconciled with religious creation stories such as those narrated in the book of Genesis; (2) the evolutionary notion of natural selection seems to eliminate the role of God in creating the various species of life; (3) Darwin’s theory of human descent from nonhuman forms of life raises questions about traditional beliefs in human uniqueness, such as the biblical claim that human beings are created “in the image and likeness of God”; (4) the prominent role of chance or accidents in evolution raises questions about whether a creator truly cares for the world; and (5) the competitive “struggle for existence” inherent in evolution seems at odds with a Universe created by God.
What did Darwin think about God? After returning (in 1836) from his sea voyage, he spent the next 20 years or so brooding about the theological implications of his discoveries. He had once taken for granted, as almost everyone else did at the time, that all living species came into being by God’s special creation in the beginning. However, reflecting on what he had observed during his sea voyage, Darwin began to wonder how his Christian faith could be true. His doubts continued to grow, probably reinforced by the anguish he experienced at the deaths of his father and 10-year-old daughter, Annie. In his autobiography Darwin writes: “Disbelief crept over me at a very slow rate, but was at last complete. The rate was so slow that I felt no distress, and have never since doubted for a single second that my conclusion was correct.”
Still, Darwin never considered himself the outright atheist that some modern writers have made him out to be. He continued to refer occasionally to the work of a “Creator” who fashioned the Universe and its general laws but who then left its living outcomes to a combination of chance and natural selection. In any case, the religious world of his time was ill prepared for his ideas. Even now, some people are still reeling from the shock Darwin seems to have delivered to traditional beliefs. For others, however, an appreciation of his ideas deepens and widens their faith in God.

A depiction of the Garden of Eden by Hieronymus Bosch, c. 1500

When Darwin’s On the Origin of Species first appeared, most people in Europe and America read the biblical accounts of origins literally. They thought the world was only around 6,000 years old and all living species had been created separately and in a fixed way at the time of the world’s origins. So, can ancient scriptural accounts of the world’s creation by God be reconciled with Darwin’s new story? Here are three responses to the question:

This approach, whose adherents include both religious believers and skeptics, maintains that evolution by natural selection can never be reconciled with belief in God. Conflict comprises two main groups. On one side are “creationists” and proponents of “intelligent design.” Both groups reject evolution as scientifically misguided. Creationists are Christians (and Muslims) who consider their holy books to be the source of true science and who therefore reject Darwinian evolution as simply wrong. Proponents of intelligent design do not necessarily read the scriptural texts literally, but they consider the complexity of life and subcellular mechanisms too staggering to be the result of natural causes alone. They argue that a supernatural agency is responsible for the complex “design” that exists in the domain of life.
There are also those who believe strongly in evolution and use it in their arguments against the existence of a creative and providential deity. These people use the conflict position to reject both creationism and intelligent design as wishful thinking incompatible with evolutionary biology. Especially in the United States, the sense of a conflict between evolution and faith continues to dominate public discussions. There are other ways, however, of looking at the issue.

This approach claims that science and faith are responding to completely different kinds of questions, and so there can be no genuine conflict between evolution and theology. The contrast approach argues that people should simply acknowledge that sacred scriptures are not science and that Darwinian science has nothing to do with faith. In the Roman Catholic Church, for example, Pope Leo XIII in 1893 instructed the faithful not to look for scientific information in biblical texts. Galileo had given his fellow Catholics the same advice back in the 17th century. As far as evolution is concerned, therefore, Darwin’s theory of life’s descent and diversity should never be placed in competition with biblical creation narratives. The creation stories in the Bible were not intended to satisfy scientific curiosity but to urge devotees to be grateful for the richness of creation. The Bible’s intention is to answer questions such as “Why is there anything at all rather than nothing?” and “Is there an eternal reason for trusting that life is worthwhile?”
For the most part, Roman Catholics and other mainstream Christian church- es have avoided confusing science with faith and theology by recognizing that they answer different questions and serve different needs. Nevertheless, major strands of fundamentalist and evangelical Protestantism still view the Bible as scientifically accurate, and they consider Darwin’s science to be incompatible with biblical “science.” According to the contrast position, however, reading the Bible as a source of scientific information, whether by creationists or religiously skeptical evolutionists, misses the whole point of the ancient religious literature.

This approach sees truth in both science and religion, and since truth cannot contradict truth, scientific and religious truths must be reconcilable. It adds that in the real world science and faith can enrich each other. This means that, after Darwin, people of faith cannot have exactly the same thoughts about God as before. Religious believers and theologians need to readjust their thinking about God after Darwin no less than they did after Copernicus’s demonstration of a Sun-centered Solar System. Challenges such as evolution are essential to keeping faith and theology alive and healthy. Theology was eventually able to adjust to a heliocentric Universe, so it can now adjust to evolution. The theory of evolution and faith in a creative and providential deity are not mutually exclusive and numerous theologians and scientists have found ways to reconcile these beliefs. In their view, there is no necessary danger to religious faith in thinking bold new thoughts about God after Darwin. After all, even the idea of God, whether people are aware of it or not, has evolved over the course of time, and it will continue to do so. If we take the time to think about God in terms of evolution, convergence argues, religious understanding will have everything to gain and nothing to lose. 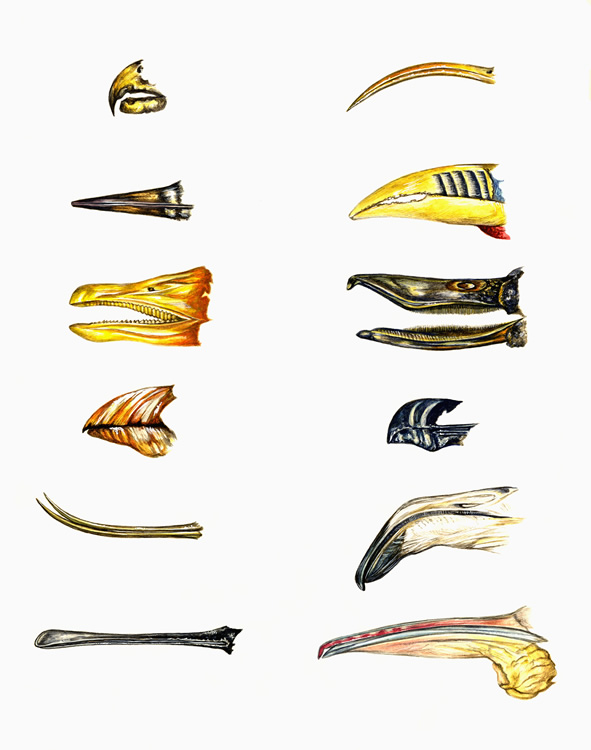 Ever since Darwin, many Christians and other religious people have been enthusiastic about the discovery of evolution. For example, immediately after On the Origin of Species was published, the learned Anglican priest and theologian Charles Kingsley gave thanks to Darwin for demonstrating how ingenious and creative evolution is and how the exciting new picture of life had enlarged his understanding of the Creator. A God who can make a universe that can make itself by way of natural processes, Kingsley proposed, is much more impressive and worthy of worship than one who is always tinkering with the world or keeping it tied to divine puppet strings.
Likewise, the Catholic priest and renowned geologist and paleontologist Pierre Teilhard de Chardin (1881–1955) wrote many works arguing that his own faith makes more sense after Darwin than it did before. As one of the first exponents of big history, Teilhard emphasized that evolutionary biology — along with geology, astrophysics, and cosmology — clearly demonstrated that the Universe is still coming into being. The fact that this process involves struggling, chance, failure, and loss — along with grandeur and beauty — is completely consistent with the fact that the Universe remains unfinished. The role of a creator, Teilhard proposed, is not to force the Universe to fit tightly and immediately into a prefabricated mold, but to open it to an ever-widening range of new possibilities as it moves toward a fresh future.
God creates this open universe through natural processes rather than magic. As an evolutionist and a devout Christian, Teilhard saw no contradiction in interpreting the whole of cosmic history as the response to an invitation by God. God, he insisted, is not a dictator but the ultimate and everlasting goal of cosmic process. God always makes room for freedom. Moreover, Teilhard suggested that, with evolution, the meaning of human life and moral action includes our each contributing to the great work of ongoing creation.

Are religion and science, which take different approaches to knowledge, destined to always be in conflict? Please post your thoughts in the Questions Area below.

John F. Haught is a Roman Catholic theologian and senior research fellow at the Woodstock Theological Center at Georgetown University, in Washington, D.C. He is the author of numerous books, including Science and Faith: A New Introduction (Mahwah, NJ: Paulist Press, 2012).

Want to join the conversation?