The term “high priest” usually refers either to an individual who holds the office of ruler–priest, or to one who is the head of a religious caste.

Pinudjem II as Theban High Priest of Amun. From his Book of the Dead.

In ancient Egypt, a high priest was the chief priest of any of the many gods revered by the Egyptians.

The priesthood in ancient Israel had a high priest who served in the Tabernacle then in the First Temple and Second Temple in Jerusalem. 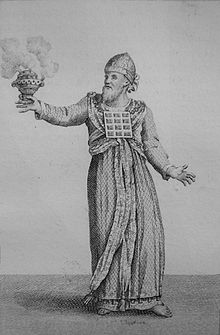 Illustration of a high priest in the book Storia dell’ Antico e Nuovo Testamento of Agostino Calmet, published in 1821.

The New Testament book of Hebrews uses the term “high priest” sixteen times; in ten of those instances Jesus Christ is explicitly or implicitly identified as the office holder (e.g. Hebrews 3:1; 4:14; and 9:11). Some Old Testament texts prophesy of a priest-king (in ancient Israel, priests and royalty were distinct, with priests from the tribe of Levi and kings from the tribes of Benjamin and Judah). Christianity views Jesus Christ as fulfilling these prophecies, effectively superseding the priestly order of Levi, by acting as both eternal high priest and king according to the order of Melchizedek.

In The Church of Jesus Christ of Latter-day Saints and other Latter Day Saint sects, High Priest is also among the priesthood offices in the Melchizedek priesthood.

Although the title is generally used in connection with a religious organization, some non-religious groups use it either mockingly or by tradition to reference high-ranking offices within the group. For example, in Royal Arch Masonry the Excellent High Priest serves as leader of the chapter. As the title is allegorical in nature, a reference to the Kohen Gadol, the position comes with no religious authority. The phrase is also often used to describe someone who is deemed to be an innovator or leader in a field of achievement. For example, an 1893 publication describes ancient Greek playwright Aristophanes as having been “the high-priest of comedy”.[2]

Libertarian talk show host and Fair Tax proponent Neil Boortz often refers to himself on air as the “High Priest of the Church of the Painful Truth”.[3]

Musician Nina Simone is often referred to as the High Priestess of Soul.[citation needed]

The High Priestess is the second trump or Major Arcana card in most traditional Tarot decks.