Take a Peek Inside an Ancient Temple! 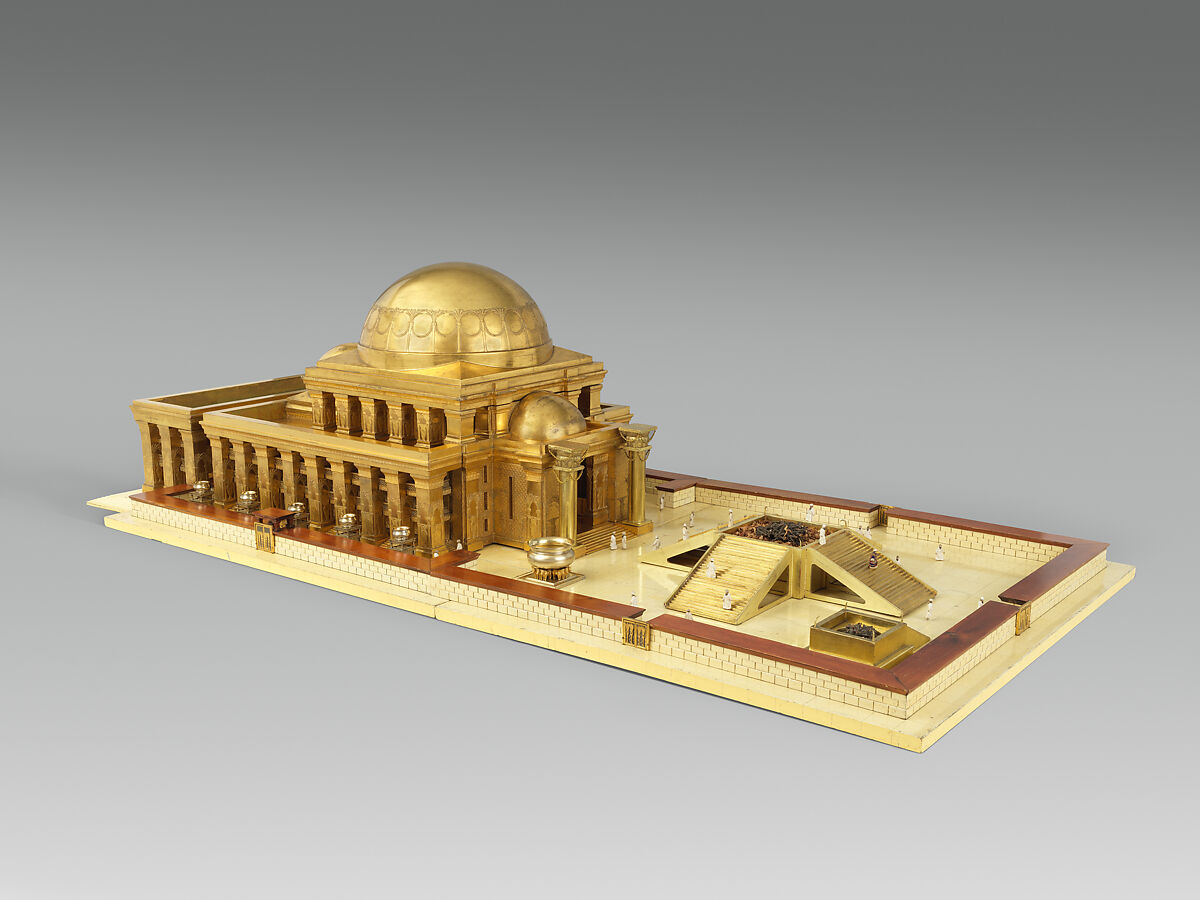 Today, we can use the internet to explore art, culture, and religion from around the world. Long ago, people were limited to what they could learn about in books, magazines, or better yet, in person. During the Victorian era in England (after Queen Victoria, reigned 1837 through January 1901), large public exhibitions became popular. These exhibitions, like the London Great Exhibition of the Works of Industry of all Nations in 1851, presented the public with artistic and scientific achievements from different cultural groups.

In 1883, a biblical scholar (a person who studies the Bible) named Thomas Newberry designed a model, or a small, three-dimensional copy, of an ancient temple in Jerusalem, based on descriptions of its architecture that he found in the Bible. Four years later, the model was featured as the centerpiece of one of these large, public exhibitions: the Anglo-Jewish Historical Exhibition. This exhibition was the first public display of Jewish religious art, called Judaica, and having it on view for thousands of visitors of different cultural and religious backgrounds made people more interested in Jewish art than before.

The Temple of Solomon

According to Jewish tradition, the Temple of Solomon, also known as “the First Temple,” was built by King Solomon (circa 990–931 BCE) long ago on the spot where God created Adam, the first man. But the building was destroyed four hundred years later. It was replaced with the Second Temple, which was built by groups of exiled Jewish people returning to Jerusalem. The site of the Temple is considered one of the holiest places in the world, and is significant to Jews, Muslims, and Christians across the globe.

Thanks to the efforts of The Met’s Imaging Department (people whose job it is to create images of works of art), we can use digital technology to take a peek inside Newberry’s model! Check it out in the video below:

Today, biblical scholars use archaeology to search for traces of the ancient structure. Newberry, however, based the design for his model on descriptions of the Temple’s architecture and furnishings written in the Bible. He believed that each part of the Temple’s construction, from the material used to build the walls to the techniques used to lay the stones in place, had a spiritual meaning. Newberry’s scale model matches these descriptions as closely as possible. Let’s take a closer look at some of the rooms inside.

The largest room in the Temple is called the Holy Place. It is the main hall of the Temple. According to tradition, only the priests responsible for maintaining the Holy Place’s furnishings were permitted to enter.

Just as described in the Bible, the walls and floors in Newberry’s model are lined with gold sheets ornamented with palm trees and cherubim (pronounced chair-roo-beam, a type of angel) . Inside are ten golden lampstands, which are said to have lit the Holy Place and burned continuously in the Temple throughout the day and the night. For Newberry, the lamps’ constant light symbolized God’s message of grace to humanity.

Beside each lampstand is a golden table for displaying a loaf of bread. These loaves, which are called shewbread, symbolize God’s gift of nourishment for the people of Israel.

At the end of the hall is an altar made of cedar wood covered in gold, called the altar of incense. Lighting incense every evening was one of the duties of the priests that were permitted to enter the Holy Place.

The Holiest of Holies

At the west end of the Holy Place, behind the altar of incense, is the doorway to the most sacred room in the temple: the Holiest of Holies, or the Most Holy Place. It is said that no one was allowed inside… except for once a year on Yom Kippur, a Jewish holiday when worshippers fast and atone for their sins. On that day, the High Priest was allowed to enter to make offerings to God.

Synagogues all over the world have a special cabinet called an ark to hold the scrolls of the Torah. According to Jewish tradition, each ark is considered a miniature version of this room.

The Ark of the Covenant

According to the Bible, the Ark of the Covenant was stored in the Holiest of Holies. The chest is made from a special wood and covered in gold, and is said to have been given to Moses by God. Inside were the two stone tablets on which Moses copied down the Ten Commandments. The Ark of the Covenant symbolized the continual presence of God among his people.

When it was displayed at the Anglo-Jewish Historical Exhibition, Newberry’s model of the Temple not only taught people about its construction, but also about its symbolic meanings. We can learn a lot from virtual experiences and from looking at pictures, but sometimes an in-person experience just can’t be beat. Think of a time you learned by exploring something yourself. How did your experience help you understand what you were learning about better? And if you could make a model of anything, what would it be?