You are here: Home / 5* INFO / WILL IN THE WORLD How Shakespeare became …5*info

Items related to WILL IN THE WORLD How Shakespeare became Shakespeare

Lowest Price
Will in the World: How Shakespeare Became Shakespeare
Stephen Greenblatt

Home  GREENBLATT, Stephen  WILL IN THE WORLD How Shakespeare became Shakespeare 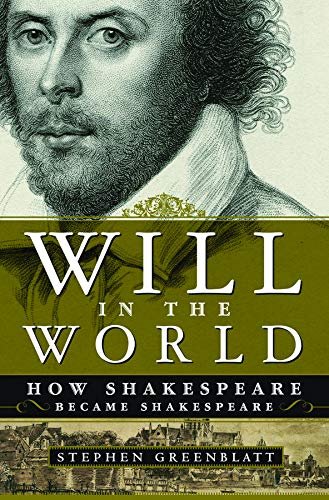 View all 140 copies of this book

Title: WILL IN THE WORLD How Shakespeare became …

Synopsis:Stephen Greenblatt, the charismatic Harvard professor who “knows more about Shakespeare than Ben Jonson or the Dark Lady did” (John Leonard, Harper’s), has written a biography that enables us to see, hear, and feel how an acutely sensitive and talented boy, surrounded by the rich tapestry of Elizabethan life; full of drama and pageantry, and also cruelty and danger; could have become the world’s greatest playwright. A young man from the provinces a man without wealth, connections, or university education moves to London. In a remarkably short time he becomes the greatest playwright not just of his age but of all time. His works appeal to urban sophisticates and first-time theatergoers; he turns politics into poetry; he recklessly mingles vulgar clowning and philosophical subtlety. How is such an achievement to be explained? Will in the World interweaves a searching account of Elizabethan England with a vivid narrative of the playwright’s life. We see Shakespeare learning his craft, starting a family, and forging a career for himself in the wildly competitive London theater world, while at the same time grappling with dangerous religious and political forces that took less-agile figures to the scaffold. Above all, we never lose sight of the great works A Midsummer Night’s Dream, Romeo and Juliet, Hamlet, Macbeth, and more that continue after four hundred years to delight and haunt audiences everywhere. The basic biographical facts of Shakespeare’s life have been known for over a century, but now Stephen Greenblatt shows how this particular life history gave rise to the world’s greatest writer. Bringing together little-known historical facts and little-noticed elements of Shakespeare’s plays, Greenblatt makes inspired connections between the life and the works and deliver “a dazzling and subtle biography” (Richard Lacayo, Time). Readers will experience Shakespeare’s vital plays again as if for the first time, but with greater understanding and appreciation of their extraordinary depth and humanity. A Best Book of the Year The New York Times 10 Best Books of 2004; Time magazine’s #1 Best Nonfiction Book; A Washington Post Book World Rave; An Economist Best Book; A San Francisco Chronicle Best Book; A Christian Science Monitor Best Book; A Chicago Tribune Best Book; A Pittsburgh Post-Gazette Best Book; NPR’s Maureen Corrigan’s Best.”

Review:Why should we read Stephen Greenblatt’s Will in the World? There have been innumerable biographies of William Shakespeare, but the greatest of all writers remains the great unknowable. We know about the petty business dealings, the death of his son, his career as a man of the theatre, and (of course) the seemingly contemptuous bequeath to Anne Hathaway of his ‘second best bed’. But any biographer is left scratching for much more than that–apart, of course, from adducing what can be read of the man’s characters from his work (an enterprise fraught with danger). Shakespeare is not Hamlet, Lear or Benedict–though, of course, he is also, in a real sense, all three.

What makes Greenblatt’s account the most valuable in many years (literally so, since famously massive advances were paid for it) is the synthesis of incisive scholarship, immense enthusiasm for the subject and an unparalleled ability to conjure up the Elizabethan world with colour and veracity. If the author’s conclusion’s about the genius at the centre of his narrative are open to question, Will in the World is none the worse for that–Greenblatt enjoys provoking the reader, and the result is an energetic conjuring of a brilliant man and those around him (Christopher Marlowe and Ben Johnson are evoked with enviable skill, as are such figures as the prototype for Falstaff, Robert Green).

With something of the vigour of the Bard’s writing, Greenblatt takes us through the bawdy, teeming Bankside district (centuries before it became a tourist destination), and the Machiavellian, dangerous world of the court–in fact, all the splendour and misery of the Elizabethan age–and at the centre of it all, its greatest artist. The Will we meet here may owe much to Greenblatt’s very personal interpretation, but the portrait is fascinating.–Barry Forshaw

“About this title” may belong to another edition of this title.

Members of these associations are committed to maintaining the highest standards. They vouch for the authenticity of all items offered for sale. They provide expert and detailed descriptions, disclose all significant defects and/or restorations, provide clear and accurate pricing, and operate with fairness and honesty during the purchase experience.

Terms of Sale:
cash with order, except dealers known to us or institutions billed
to their requirements. Visa, MC, American Express accepted.Please add $6.50 for shipping and handling (media mail), add $7 for priority mail.
Shipping Terms:
Shipping costs are based on books weighing 2.2 LB, or 1 KG. If your book order is heavy or oversized, we may contact you to let you know extra shipping is required.

Rise And Fall Of Adam And Eve
GREENBLATT, STEPHEN

Will in the World: How Shakespeare Became Shakespeare
Greenblatt, Stephen
Add to Wants