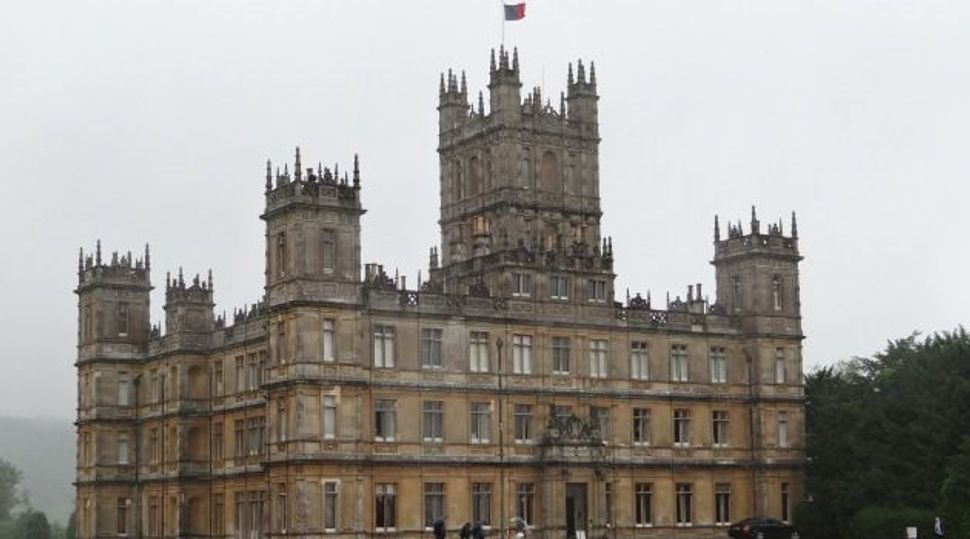 Uptown Living: The Edwardian family that inhabits TV?s famous chateau is based on the Carnarvons. Image by Getty Images

Millions of TV viewers across the world continue to be enthralled by “Downton Abbey.” The BBC series chronicles the lives of an Edwardian noble family — and their host of loyal servants — forced to adjust to modernity as it ends the Victorian era and ushers in the revolutionary changes brought on by World War I.

But few viewers probably know that there is a strong Jewish connection in the history that inspired the series.

The Crawleys, the aristocratic family depicted, and their chateau and surrounding grounds, Downton Abbey, are loosely based on the real aristocratic Carnarvon family, their hereditary seat, Highclere Castle, and the accomplishments of the fifth Countess of Carnarvon, who was in fact half Jewish. In fact, the series is partly filmed in and on the estate, which is still in the hands of the eighth Earl of Carnarvon.

So what’s the Jewish connection? Well, Highclere Castle and the fortunes of the Carnarvon family are inextricably linked to the legendary British Rothschilds. The Carnarvon family legacy might not have survived intact into the 21st century were it not for the heavy financial support provided by Alfred de Rothschild during the decades immediately preceding and following World War I.

By the last decades of the Victorian era, many ancient British aristocratic families, finding it impossible to maintain their castles and their opulent lifestyles, resorted to marrying off their male heirs to wealthy American and European heiresses.

Winston Churchill was the son of just such a union, when his father, Lord Randolph Spencer Churchill, not having inherited the estates nor the title of the Dukes of Marlborough, married Jennie Jerome in 1874, the beautiful young daughter of American multimillionaire financier, speculator and sportsman Leonard Jerome.

So it was also with George Herbert, the fifth Earl of Carnarvon, scion of one of the noblest of British families, when on June 28, 1895 he married 19-year-old Almina Wombwell, the lovely and vivacious illegitimate daughter of the fabulously wealthy Alfred de Rothschild and his long-time French mistress, Marie Wombwell.

Marie Boyer was the daughter of a Parisian banker when she married Frederick Wombwell, son of a baronet, a heavy drinker and notorious gambler, possibly even a thief. She had been estranged from him for some years when she met Alfred de Rothschild and became his mistress. Alfred was one of the three sons of Lionel Rothschild and the grandson of Nathan Mayer Rothschild, who had established the Rothschilds’ British family fortune by financing Britain’s war against Napoleon.

Alfred was an aesthete, a financial supporter and close friend of the Prince of Wales, the future King Edward VII. His lavish lifestyle, generosity to friends, philanthropy, and his brother Nathaniel’s ennoblement as the first Baron Rothschild, had made him acceptable in the highest social circles in Britain. Regardless, he remained — like his brothers — a practicing Jew, attending and supporting his synagogue and other Jewish institutions.

He never married and lavished all his parental affection, and his wealth, on his only child Almina (the unusual name is an amalgam of her father’s name and her mother’s nickname, Mina). He maintained Almina and her mother in luxury and even had Almina presented at court by Sir George Wombwell and his wife Lady Julia, the brother and sister-in-law of Almina’s mother’s late husband.

By offering an immense dowry and the promise of continuing financial support, he was able to secure her entrance into the highest levels of British society.

Almina became one of the great aristocratic hostesses. She turned Highclere Castle into one of the great Edwardian pleasure palaces with splendid parties that attracted the Prince of Wales and the elite of the era. She also used her father’s generosity to modernize Highclere Castle, bringing electricity and modern plumbing, and redecorating and recovering many parts of the castle that were beginning to show the wear and tear of time.

She also financed the modernization of the vast Carnarvon estates and, with Rothschild money, supported her husband’s many experiments with modern technology, especially the motorcar and the new flying machines. Some of the earliest English experimental flights were undertaken with the fifth Earl’s participation and sponsorship on the grounds of the Highclere estate.

Most of all, she supported her husband’s Egyptian archeological expeditions, braving Egypt’s heat and primitive facilities out in the desert, and carefully looking after and guarding his fragile health.

For years the fifth Earl, an avid collector of Egyptian artifacts, had supported archaeologist Howard Carter’s attempts to find an undisturbed tomb of the Egyptian pharaohs. It had cost the Earl a good part of his inherited fortune until Almina began to provide her father’s money. When Alfred Rothschild passed away in 1918, he left his sumptuous London residence, Seamore Place, and most of his fortune to Almina (against the wishes of the surviving British Rothschilds) enabling her to support her husband’s final exploration in the Valley of the Kings. In November 1922, he and Carter finally found the fabulous undisturbed tomb of Tutankhamun, and excavated it in February 1923, making the Earl world famous as journalists from around the globe covered the event. Tragically, two months later Lord Carnarvon was dead from blood poisoning. Almina had flown from England to his bedside to try to nurse him to health as she had done on previous occasions, but it was too late.

Almina’s nursing talents were probably her most famous skill. During World War I, she used her father’s money to turn Highclere Castle into a recuperating hospital for wounded British soldiers and developed pioneering methods of recuperative healing. When the Castle became too small, she leased Bryanston Square, a large Mayfair property in London. Wearing one of the trim uniforms she had designed for her nurses, she became a hands-on hospital administrator. In 1927, she was again instrumental in creating a third hospital in London, which she named in memory of her father, Alfred de Rothschild.

The Bryanston Hospital was visited by King George V and Queen Mary, Lord Kitchener, and other military and political leaders, and Almina received appreciative written commendations and thanks for her hospital work from the inspector of military orthopedics, Sir Colonel Robert Jones. However, she was never officially honoured by any medal or award, or, for that matter, a series on the BBC.

However, the use of Highclere Castle and Lady Almina’s conversion of the Castle into a convalescent hospital for wounded British soldiers — emphasized in the early episodes of “Downton Abbey” but credited to the character of Matthew Crawley’s energetic mother, a doctor’s widow, rather than the mistress of the house — becomes an indirect tribute to the remarkable 5th Countess of Carnarvon, a daughter of the fabulous British Rothschilds.

IN CASE YOU MISSED IT